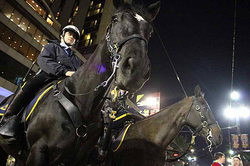 A New Orleans police officer hitched a ride on a Star on Thursday night to land his own personal muse.

Andrew Waldron was working as part of the mounted patrol aboard his horse, Star, at the annual Muses parade when he made a quick stop to propose to his girlfriend, Tara Myers. Waldron had arranged to have members of each of their families along the parade route to witness the event.

Waldron dismounted his horse, got down on one knee and popped the question. Myers said yes.

The couple met when they were students at the University of Alabama. Waldron is a homicide detective, who has been with the NOPD for about five years. He is part of the mounted patrol for Mardi Gras.

The NOPD wishes happy trails to the couple.