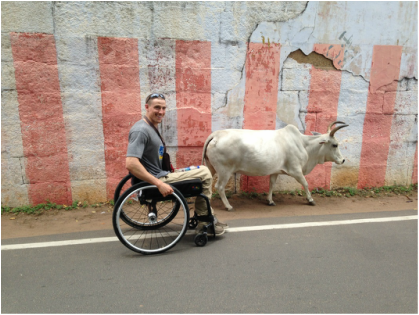 You know it's never going to end well when a blog post begins, "our luggage apparently never left Chicago," but the consequences are magnified tremendously when you realize the author of the post relies on a state-of-the-art wheelchair for transportation, and his $5,000 custom ride had gone missing somewhere between the United States and India.

Most people around the University of Kansas Medical Center know Joel Strain as the affable occupational therapy student who rolls around campus in his wheelchair, engaging his classmates with his generous smile and popping the occasional wheelie for good measure. This summer, he and fellow occupational therapy student Jenna Schulte traveled to Christian Medical College in Vellore, India, as part of the Robinson Scholars Program.

And while program founder Dr. Mani M. Mani and Kimberly Connelly, director of the Office of International Programs, had spent hours getting Joel and Jenna ready for their overseas adventure, they couldn't have anticipated that Strain's wheelchair would be misplaced, and their luggage would stay in Chicago while the two flew to Abu Dhabi and then on to Chennai, India.

"When I was helped off the plane and discovered an oversized, airport wheelchair waiting for me, I was concerned," Strain blogged. "I was just supposed to get by for the next 11 hours with the airport chair ... this was a slightly terrifying prospect."

The routine for getting a paraplegic on and off a plane involves using an aisle chair, which is narrower than a conventional wheelchair, and thus easier to use when getting around onboard. So when Strain arrived in Abu Dhabi he went looking for his chair and was assured that it had been checked directly to Chennai. Eventually, however, through perseverance, searching and some luck, Strain and his chair were reunited in the Abu Dhabi airport, and he and Schulte were able to explore the city.

And so the adventure began.

"For Joel, I had to do a lot of background work," Mani says. "They had not had a paraplegic international student. They've had lots of paraplegics, but they're not coming as students from an international location. So there was a lot of anxiety. What if? What if? What if? I talked to the people, and we got them completely changed around, and Joel had the most wonderful experience."

The Robinson Scholarship program was founded in 2004 by Mani, professor emeritus in the Department of Plastic Surgery in the School of Medicine, to honor the legacy of his mentor, Dr. David W. Robinson. Mani and Robinson met in India in the late 1960s, and Robinson convinced Mani to come to KU Medical Center for training and later to lead the burn unit.

Mani and the Robinson family began discussions about preserving Robinson's legacy in 2003, and the first Robinson Scholar traveled to India in 2006. Since then, 62 students have studied at Christian Medical College and Hospital in Vellore. In February, three students from KU School of Medicine went to college, and this summer five School of Health Professions and two School of Nursing students made the trip. Strain and Schulte traveled to India along with Taranjeet Singh, a student in the Department of Dietetics and Nutrition, and nursing students Kristin Callaghan and Lauren Andrus. Physical therapy students Ali Pistora and Stephanie Funk made the trip in July.

Mani says the three main goals of the program are to preserve Robinson's legacy; for students to learn a different way of practicing medicine; and finally, to absorb as much as they can about living in a foreign culture.

"I've studied language and culture for a long time, but this trip was an opportunity to see what I've been learning in the classroom in an entirely new way," says Schulte, who has taught English to international students. "This trip blended a lot of my interests together, and I knew that it would be an unforgettable experience."

Schulte is an experience traveler having lived in Spain, Costa Rica and Korea. Strain, however, was new to international travel. They found the people in India, especially the occupational therapists they worked with, extremely nice, helpful and somewhat curious.

"People were nothing but kind to me," says Strain. "There was a lot of pointing fingers and asking for photographs. We were a novelty as white individuals, and I was even more so as a paraplegic."

For Robinson Scholars, there is no such thing as a routine day because occupational therapists at Christian Medical College work in many different settings. Most days started around 8 or 9 a.m., and lasted until 4 or 5 p.m. Often Schulte and Strain were able to walk to their posting, but on other days they would have to load into an auto-rickshaw to go to remote settings because buses were not wheelchair accessible. On one occasion, Strain even took an ambulance ride in order to get to the village where he was assigned.

"We did a different rotation each week," Strain says. "We were mostly observing, but the OT's were willing to let us have some hands-on experience if we were comfortable. "

For both Schulte and Strain there was a lot to learn about working in a different culture. Schulte says she could tell that in India the people had more traditional gender roles, but they could be nuanced, adding that it is quite unusual for a woman to have male friends, and that interactions between the genders are often limited to immediate family members.

"Joel and I were often mistaken for a couple instead of classmates, and men often spoke only to Joel instead of me," she says. "I avoided any gestures or touching that could be misinterpreted. I could tell it was very important for me to dress modestly. I wore loose fitting tunic tops which covered my chest and shoulders and wore long skirts or leggings. I never wore shorts, a tank top, or a skirt that fell above my ankles. People felt uncomfortable if I tried to stand during OT treatment/interviews instead of sitting."

For Strain, travel required stretching out of his familiar comfort zone. And while he took much of the adventure in stride, quite often the experience meant experimenting with things like spicy Indian cuisine.

"I knew it was going to be spicy, so I made a point to order things with 'less spice,'" he says. "Most people serving food would see me - the pitiful American clearly unaccustomed to hot food - and generously guide me to a more bland option, which was still spicy."

Schulte and Strain were impressed by the occupational therapists they observed in India; by how hard they worked and how they accommodated the needs of their patients and families. Both returned with new perspectives about occupational therapy and a renewed enthusiasm for their chosen career.

"I had only studied occupational therapy for one year, so some of my very first experiences with OT clinical work were in India," Schulte says. "The opportunity made me proud that I chose such an interesting field of study. It made me even more eager to learn about OT and how OT functions in different settings."

"Seeing occupational therapy in a setting on the other side of the world was unique, but I was encouraged to see the same underlying mission that I have been taught by the faculty at KU Medical Center," Strain says. "The OT's in India are helping people to engage in the activities that are meaningful and important to them. It just might look a little different. They have different priorities, resources, values and a much different environment. I don't think the experience will so much change my approach as much as it is direct it and solidify the path my faculty has placed me on."

Strain has used a wheelchair since suffering a low-spinal cord injury in a car crash 10 years ago. In India, most people with similar injuries are taught to use leg braces and crutches because the country is not very wheelchair accessible. As a result, the people who do use wheelchairs generally do not have the upper-body strength and physical capabilities that Strain has.

During his experience at Christian Medical College, Strain was able to demonstrate many of the skills he has learned, amazing the staff and patients in the rehabilitation unit with the techniques that he has learned. But Strain was quick to point out that he was there to learn from his hosts.

"Part of me felt a little audacious coming in with a top-of-the-line wheelchair, that I'd learned to use in a nearly perfect wheelchair environment and saying, 'look what I can do,' but that's really not what the trip was about," Strain says. "I'm a student. I wasn't there to teach anything. But I'm also in a pretty unique situation, so it was fun to work with the college's rehabilitation institute and demonstrate things like wheelchair maneuvering and car-rickshaw transfers."

Schulte says it was hard at times to translate some of Joel's skills to India because the United States is simply more accessible for people with disabilities than India is, and Strain has access to more advanced medical equipment such as his lightweight wheelchair, cushion, and hand controls for his car.

"Joel was very good at handling very personal questions and connecting with the people there," Schulte says. "We posed for photos, added Facebook friends and discussed what people could expect during treatment and recovery."

Strain says the general view of how people in India with disabilities are perceived is changing, and the occupational therapists at Christian Medical College are on the cutting edge of this evolution. Health and health care are not a priority for many living in poverty, and the traditional view of disability has been negative.

"In the past, these views were influenced by the former caste system and a religious belief in karma - disability was seen as shameful by some - not only does the person have a disability, but they are supposed to have it," he says.

Occupational therapists at Christian Medical College have a view that is counter to these cultural views, and it's changing the daily lives of their patients. Strain says it's a perspective that is unique to the college, and their hope is that the rest of the country will begin to treat people with disabilities differently.

Different - But The Same

At the end of his trip, Strain blogged about how people in India are just people like the folks he knew back home. He wrote about a 17-year-old who has a similar injury to his own suffered at about the same age. He shared his story with the young man who learned to push himself into a seated position for the first time while Strain was there.

Joel's injury came from a car wreck, while the boy was hurt falling out of a tree picking coconuts. Similar injuries suffered in circumstances worlds apart - different but the same.

Oh, and as for Joel's wheelchair - it went missing for another week on the trip home.