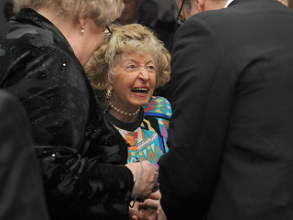 _ WINSTON-SALEM, N.C. -- The University of North Carolina School of the Arts is mourning the death of one of its founders.

Mary Duke Biddle Trent Semans, 91, died Wednesday morning. She is remembered as a beloved friend, patron and benefactor of the school that she helped found. Semans was preceded in death by her husband, Dr. James H. Semans, who died in 2005.

The funeral for Mary D.B.T. Semans will be Monday at Duke Chapel in Durham. The time of the service has not been announced.

Perhaps best known for carrying on the legacy of Duke University's founding family, Semans became one of the state's greatest philanthropists, supporting the arts and education.

“Mary Semans was the mother of UNCSA, and like the great mother she was, her love for the school was unconditional,” said UNCSA Chancellor John Mauceri. “That she led, supported and inspired this school from the moment it was imagined to the cusp of its 50th birthday was in and of itself miraculous. It is hard to imagine going forward without her.

“Now it is our responsibility to carry on as she demonstrated every day of her life, with passion, kindness, wisdom and determination,” Mauceri continued. “If there was one word to describe Mary Semans it would be ‘beautiful’ in every sense of that word.”

The Semanses served a variety of volunteer leadership roles at the school. James Semans was selected in 1964 by then-Gov. Terry Sanford as first chairman of the school's board of trustees. He served as chairman for 17 consecutive years, when his wife succeeded him on the board. Mary D.B.T. Semans served on the board from 1981 until she was no longer eligible to serve, in 1989, when she was named an honorary trustee.

“Mary Semans has been the heart and soul and most passionate champion of the University of North Carolina School of the Arts," said Chancellor Emeritus Alex Ewing. "Ever since it was founded nearly half a century ago, she believed in it, fought for it, supported it day after day, year after year, never relenting in her conviction that it served a vital function in the life of the community, the state, and the nation.

“She loved, and in turn was truly and deeply loved, by the students and faculty and staff and all who cared for the school. As we grieve our loss, even more we will always cherish her memory.”